Wash Pet Rocks With Healing Crystals, Get Drunk, Eat Sun, Figure It Out 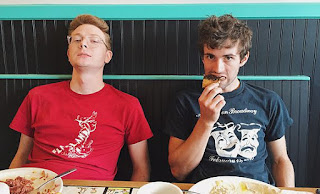 A ridiculously long title, me marrying up the band's first three cuts from their album...ah well. It;s the first week of 2016, and already there's an Exploding In Sound roster album to look forward to. Brooklyn duo Washer are finally prepped to bring out their debut LP, Here Comes Washer, in the latter stages of this month (you can pre-order limited edition orange vinyl here). Like many of the excellent albums on EIS, Washer specialise in grunged out guitar rock that cracked, bent, cryptic, hilarious, garrulous, gritty. The instrumentation and Mike Quigley's vocal delivery immediately evokes Pile, EIS' flagship band (in my opinion anyway). the new one, 'Got Drunk And Ate The Sun', has been launched on Stereogum today, and the other two are below. Look at the plain, naive art weirdness of the cover art too - if you haven't taken in how this is already pushing to be a big album around these here parts, listen harder.