They Don't Make Nosferatu D2s Like They Used To 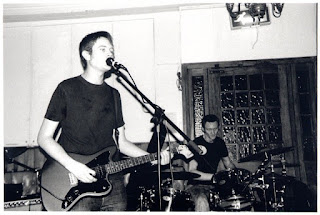 Another day, another weird pun-named band. But the ubiquitously-monikered Nosferatu D2 came about some eleven years ago, and disbanded two years later, so your chance to herald or heckle the duo for their choice of title has truly come and gone. But you can prick your ears on what they sounded like thanks to the reissuing madness of Audio Antihero (who put out physical copies of Frog’s last two releases - and I am about to head out to Jazz Servant Quarters tonight to see 'em). Basically AA was started in 2009 to release the band’s “lost” LP, We're Gonna Walk Around This City With Our Headphones On To Block Out The Noise, on cassette. It is surprising just how well the album still holds up today. The sibling duo have everything that should have made them massive in their 2006 heyday - you can hear Los Campesinos!, Frightened Rabbit, The Twilight Sad and Danananackroyd here. There are the spiked and verbose lyrics, spiked and virile instrumentation that is tightly coiled and leaping in tangential sonic corridors at the drop of a hat, spiked and hilarious song titles (such as 'We'll Play "The Power of Love" By Frankie Goes to Hollywood A Thousand Times Tonight' and 'The Kids From Fame' on the subsequent Older, Sadder, Wiser EP) - acerbic, tangled, nervous energy abounds. Darkly emotional, acridly bitter, snarkily serrated - Nosferatu D2 should have been so, so much more. At least we have this legacy to latch on to...