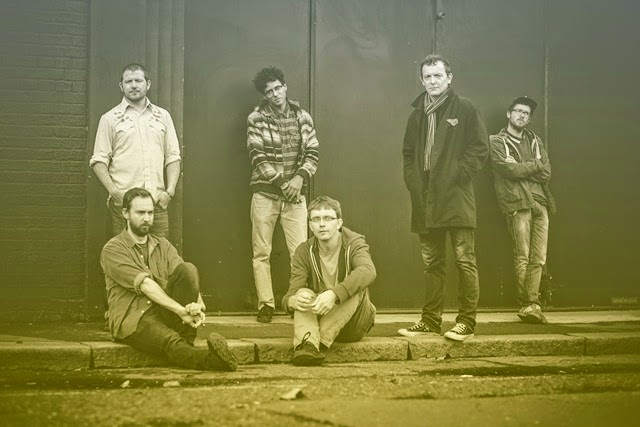 I really wanted to head along to the Lexington tomorrow night to catch the launch of sonic madmen Hey Colossus' new album, In Black And Gold. I am heading along to the Disappears show at The Lexington tonight instead (sorry guys - double booked!) which will (hopefully) be a killer show in itself - but if this album is anything to go by, that show will go all Scanners on people, painting the venue red with exploded heads. It isn't as all-out batshit crazy as their brilliant album of 2013 Cuckoo Live Life Like Cuckoo, but there is a tempered aggression held here that underscores a more deliberated and calibrated cerebral attack. It starts off with 'Hold On' which is all contemplative, a mystical drift more akin to the Jason Pierce end of psychedelia - but don't worry, the darkness returns with the cantankerous yet plodding march of 'Sisters and Brothers', a syncopated stutter imbued with thunder that Pere Ubu have mined of late. 'Hey, Dead Eyes, Up!' strikes a balance between blues-addled excess and Monster Magnet-fried excess - the two excesses finely complementing each other - and all just over three minutes in fermentation. 'Wired_Brainless' is as meticulous in its lurking in the shadows creep as it is ludicrous; 'Black And Gold' takes a closer take to doom before dragging it out into the desert and burying it up to its neck; 'Lagos Atom' is a synapse surge of bio-engineered horror; 'Eat It' is Black Sabbath for the 21st century unhinged maniac. Closer 'Sinking, Feeling' owes as much to the Spaghetti Western gunslingers as it does to the molten earth axe-slingers. It is all a much more studied and serious release - but then again, this is Hey Colossus we are talking about here. Short, tethered, acutely focused - but you can't escape the gurning insanity that lies therein.