Hangar Lands - Lofly Is Back! 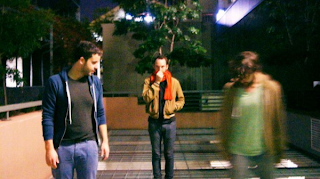 Whilst it may seem that local label/promoters Lofly (Nova Scotia, Tape/Off, Do The Robot) have been dormant of late, it’s all a ruse – they have been regrouping, growing, strength in numbers and all that. Since the loss of converted tyre factory The Hangar last year, Lofly has struggled to find a foothold in the local scene to reignite those passionate nights of music, flowing booze and massive fun times that many people harbour close to their hearts. A minor stint at the Beetle Bar didn’t work out. But now we (note that pronoun? Yes, this is a little self-aggrandising, for I am now part of the Lofly collective) have transplanted The Hangar to the Waiting Room, where the first Lofly show in ages (discounting the great double bill that was part of this year’s Brisbane Festival) will be taking place this Saturday. We aim to be bringing back the excitement that fuelled those Hangar shows of yore, with a program that strives to bring together a new local act, an established local act and an interstate act once a month for your pleasure.

This Saturday sees meteoric “institution” Tiny Spiders (well they certainly play hard and fast enough, and are the raddest people to boot), Adelaide storm-starters Sparkspitter (I have heard nothing but great things about these guys, and it’s a “hometown” show as such as it’s their first Australian show on the back of an Asian tour) and new kids with Scandinavian leanings (but are decidedly from the Sunshine State), Denmark.

$10, kicking off at 8. To get all walks of life excited, this will be an all ages event, so the boozy element may have to be done at the Melbourne (or any of the far better options West End has to offer).