Triple Trip To The Moon 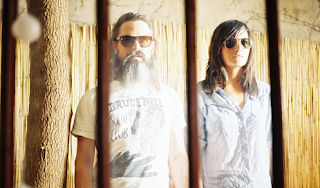 I need to whip this up quick, because I have to get to a cassette listening party, so here are the past three releases from San Fran cosmic sorcerers Moon Duo. 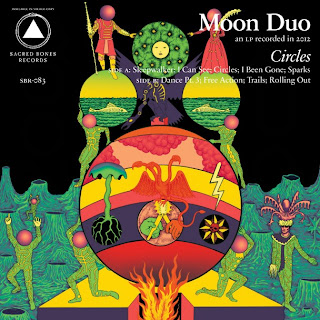 Two are through Sacred Bones, and we’ll start with the duo’s new LP Circles, which centres around philosopher Ralph Waldo Emerson’s studies of circles within society and their function – really. Which kinda makes sense, seeing as Ripley Johnson and Sanae Yamada essentially deal in repetitive rhythmic patterns, stretched to a certain point before they furl back in on themselves. In the main, I found myself a little disappointed with Circles, which is a shame seeing as Johnson can just about do no wrong in my eyes. Yamada’s synth is more at the forefront, and strangely this is the best and worst element – what she does is incredible, but the songs seem to suffer because of it. It may be a direction that they need to work on, thus their next releases are pregnant with anticipation. That said, there are some killer tunes on there, especially the title track, ‘Sleepwalker’ and the thudding, seven-plus minute finale, ‘Rolling Out’. 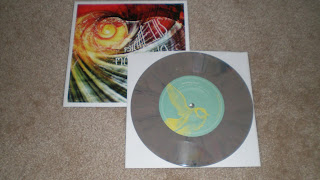 Preceding this was a 7” split with another great psych band, Psychic Ills. Their contribution is the six minute ‘Zoned’, which is more befitting of the warbling mind-bending kosmiche experiments that Moon Duo have delved in since its inception. This was left on the Circles sessions’ cutting room floor – thank God it found its place in the world though, because in my opinion, this almost betters every track on that album. ‘Take Me With You’, the Psychic Ills contribution, is also excellent, a folky trance that is more straight up than you might expect from them – the perfect counterpoint. In fact, this is one of my favourite splits of the year. 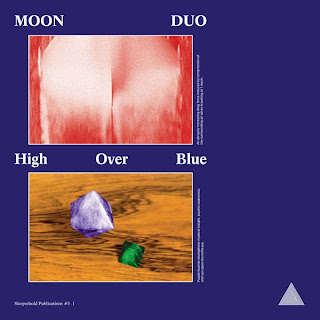 Finally there is the mammoth ‘High Over Blue’ that Sleeperhold Publications saw fit to put out (that should tell you enough about this release...). Twenty two minutes of fragmented, stretched mind-altering magic. Nuff said.

You can get ‘Zoned’ and ‘High Over Blue’ as a bonus CD if you purchase the CD version of Circles, which is nice. Get these releases here (for Sacred Bones’ releases) and here (for High Over Blue).
Posted by Brendan T