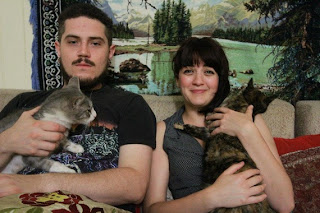 Starting as an idea for a university project exploring recording techniques and tones, Roku Music is the best of both of their aural worlds – the dark throbbing tensions and feedback squalls that bleed through is a distant relative to Miller’s No Anchor affiliations, whilst the static pop aesthetics that ebb and flow like a reticent tide can be as lightweight as a Feather(s) or a hazy dream from a Tiny Spider(s). I really like it. There are elements of washed out dirge that, when married to Tulloch’s soft vocals reminds me of True Widow (see ‘Everything’s Alright’ for an example); at other times a darker, beefed up theredsunband (especially on ‘Primitive’); but mostly it sounds just plain rad. Even if it’s on a damned cassette…


The cassette listening party is tomorrow night at The Waiting Room – and its free! Come have some bevvies and listen to a cassette, at a party.
Roku Music – Primitive
Roku Music – You Never Change
Posted by Brendan T