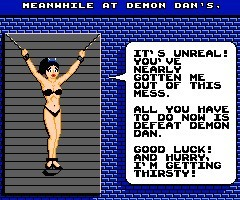 If you know you're early 90s NES (that's Nintendo Entertainment System for those kids where Super Mario Bros. 2 is not cool retro enough for you) you might have heard of, or even played, the platformer Menace Beach. It was fairly bad - you were a skateboarder who had to save your girlfriends by beating up and avoiding ninjas, clowns and the like, all the while your girlfriend is chained up and her clothes are rotting away...really! THAT was the drawcard right there. As a kid it was up there with the "finish Super Metroid in under three hours and you get to see Samus in her briefs" level of prepubescent awesomeness. Or maybe you are familiar with Sunday Funday, which is exactly the same game except you are fighting off bullies, fish and businessmen to get to Sunday school (yes, a Christian computer game, yay). Then there is Miss Peach World, which has Princess from the Mario universe on the cover but doesn’t feature her anywhere, yet the tied up girlfriend’s clothes disappear all together…

Then again, it’s best to leave that in the annals of video game direness and focus instead on UK’s Menace Beach, a four-piece with members from the likes of Sky Larking and Hookworms whose abrupt Dream Out EP is pretty damn killer. Four tracks that each struggle to bother two minutes, Dream Out develops as a pill of jagged punk with angular frission and the occasional dalliance with pop, imbuing it all with enough intrigue that these songs feel like a Frank Miller 3D drawing without the glasses – it’s rad and exciting, yet not centred where you think it should be. That is the point though – as with the bizarre contradictions of the various versions of the video game, Menace Beach eschew convention, so even as you jump and dance you do so with an inescapable sense of unease. Discordant pop for the more switched on slackers, who like cerebral stimulants with their Coco Pops. 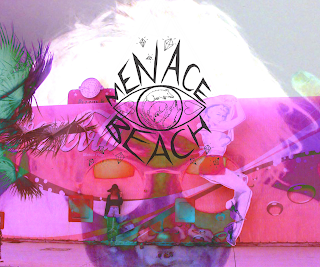 Listen to Dream Out below. It comes out in the next week or so, but be warned - only 50 (!?) of these cassettes have been made, so watch the band's website religiously to get one of these aural hotcakes.