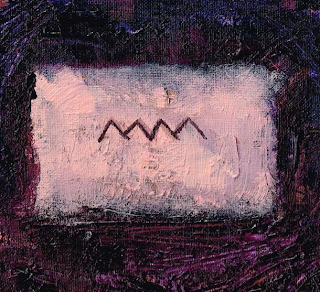 I have mentioned on a few occasions my admiration of Shawn Foree, more commonly known to us mere mortals as Digital Leather. But now, alongside his wife Rachel, he has stepped down from his sulphur-caked synth and garage blast pedestal and joined our ranks. Purple Fire is the first outing for new band Mere Mortals, and regardless of what you may think, ‘B12’ is one of the best songs that Foree has committed to tape, and thus is one of the best songs of 2012. Bass that batters your pelvic floor, a groove that eats into the soles of your feet like walking on electrified water, and vamped vocals that wooze along with forlorn despair, all the while with some of the best synth I’ve heard for some time (maybe it’s the simplicity of the languid hook, that makes you grin and grimace, a cloying coyness, all at once?). The whole album is warped bass brutality, and Foree is in gleefully manic form. As the man himself intimates, “Think metallic mock pop with a post-heroin aftertaste.” Hmmm…chalky copper and decaying calcium…

Grab Purple Fire here. The duo don’t have a label yet – but then again, this is the kind of addictiveness that governments want to ban. Don’t be surprised if their faces adorn a faceless pack of Australian cigarettes at your local 7-Eleven before the year’s out.