Four Score Ebb And Thrall Of An Alpine Decline 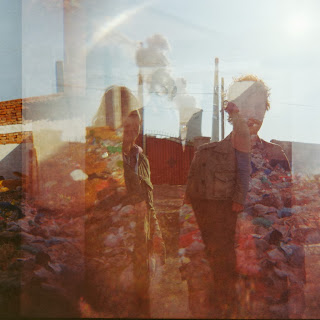 I was sent one of those anonymous Bandcamp emails yesterday, telling me that Shaun over at Tenzenmen Records was releasing yet another album. I still haven't paid lip service to some of the killers that have come through this year (sorry Birdstriking, apologies White+), yet some are frontrunner favourite albums of 2013 (hello Yes I'm Leaving; hi there Bone) so I thought I'd head over and look. It was Disappearance, the third album from Beijing-based band Alpine Decline. But as I scrolled down the side, I saw that there were a glut of albums that Tenzenmen had put out, or were about to put out - and all were from Alpine Decline. Investigation, both aural and journalistic (well as journalistic as I get), was necessary.

Seems that the band released their self-titled debut in 2010 (which comes across like Built To Spill in a near murderous sonic sense of brutality) in LA, where they had formed, then travelled to China and into the Himalayas, before coming back and recording Visualisations later in the same year. It follows a similar pattern to Alpine Decline, yet with a wider expansive of crackle and drone - it was like the trek had started opening a hitherto unknown propensity for languidly and porous drone, albeit still kept in check by an innate drive for melody and conciseness.

Yet something had been awakened, and the band could not sate this creative hunger. In 2011 the duo returned to the studio where they recorded Vizualisations (again helmed by M Geddes - who had helmed productions of Robedoor and Pocahaunted records in the past), and the resultant works, collated into third album Disappearance (the album that brought me on this mystic journey) is decidedly more insular yet kinetic; more warped and yet more focused than their predecessors. The third eye was well and truly alive within these two. A deliberate exercise in hypnosis and concerted, controlled elongation (yet with the inherent melody and groove a cell-level mainstay), the twelve tracks on offer still remained succinct, yet each appeared to contain their own alien technology, their own enveloping worlds. Such strong and clear evolution in such a short timeframe is frightening.

Then the duo disappeared, back to the outskirts of Beijing, for a year. Finally they returned with a fourth album tucked firmly under their grimy arms, and Night of the Long Knives was another transmogrification of Alpine Decline - this time more contemplative, more glazed, more ethereal. There was more of a thousand yard stare here - like returning from self-imposed exile to find the world you left behind rent asunder, nothing left behind, nothing recognisable. There are songs that still echo the very best, maudlin BtS (see 'Sleeping Gas' for example) yet with a gauzy, dystopian hue.


These four albums are still sinking in - yet I think I may have stumbled across a band that is creating albums that I will fall in love with for different reasons; that will seep into my very being; that are, in other words, quintessentially essential listening. And the more that these albums are listened to, and embraced, and revered, the stronger Alpine Decline's id grows - the albums will continue to tumble forth, fully formed and magnificent - and the world will evolve along with them.

Grab all four albums here. Seriously, for the betterment of mankind.
Posted by Brendan T