In The Treehouse Zone 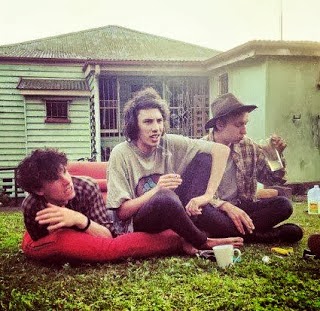 Tasmania's Treehouse came on my radar back in August when they supported Per Purpose on their 'Eureka' single launch. The fact that a goon sack and discordant guitar flailing complemented each other in their set meant I had connected immediately with Treehouse and their fuse-blasting fare. Now Vacant Valley are reissuing the band's debut Interzone on luscious 12" vinyl. This is loud, scuzzy, droning pop that is as ardent as it is flippant - throwaway nuggets of digestible, discernible knowledge, bashed out by dudes with too much time on their hands, for better or worse. Their live shows a set on a knife-edge, either elevated into an effervescent maelstrom of noise and light, or nosediving into a chasm of unrelenting chaos and despair. Well, I say despair - things are never that bad when there's an inflatable pillow of piss-yellow grape juice around... Luckily the trio come prepared with tracks made for either outcome. Interzone then stands as a shapeshifter of a record - setting the mood as the mood sets you. Corruption of two halves. 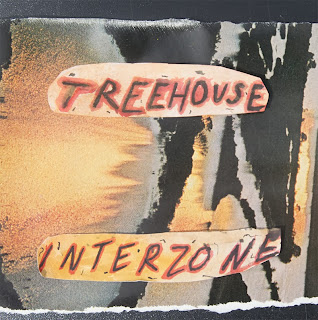 And here is a clip of another Treehouse track, 'Dead Weight', recorded by Josh Watson (Sewers) at Matt Ford's Puerile Palais (I'm sure his slap-up den of dankness has a name much more suited to the house shows he throws, but this'll do for now) the afternoon before the aforementioned Per Purpose show. Good times.