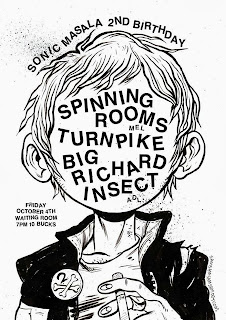 I can't talk about Batpiss without talking about The Spinning Rooms, now, can I? The Melbourne miscreants are headlining Sonic Masala's 2nd anniversary of putting on shows tomorrow night (alongside Big Richard Insect, Turnpike and Landing In The Presence Of The Enemy, Jaguars Advanced - that's the poster above) as well as an instore at Tyms Guitars on Saturday October 5.

Personal plugging aside, the four-piece have their sophomore album Complicating Things in the wings, and are starting their album launch with us! So, how is the album then?


It's bloody good. The band called it a strong tangent from their debut self-titled album released last year - but this to me is more than a natural progression. Sure, in many ways the queasy unsettled nature of the beast that lay at the core of The Spinning Rooms isn't as much in evidence here - yet the band has become a tightly coiled beast, meaning the moments they crawl out of their hidey-hole to bite you on the face is all the more effective. You have the hedonistic squall of 'Julia', the bluesy, unhinged dirge of 'Blues For Jas H. Duke', the riotous gnashing of 'Kids In The Car'... Pete Dickinson sees both albums as concepts - the first about a couple who move to the country and everything turns to shit, then Complicating Things is them returning to the city. But by the sounds of things, nothing has improved from their urban retreat - at all. The B-Side of the album dives into despair and chagrin once more, the lonely plinking piano a distinct highlight, before the ten minute closer 'I've Found A Place I Can Sleep (Parts 1 & 2) takes on a staggered ballad, which is either a glimmer of hope, or the howl of abject despair, a breaking, a surrender. This ambiguity is just another reason why The Spinning Rooms is one of the most electrifying, exciting bands on the continent right now, and Complicated Things only cements this notion.
Posted by Brendan T