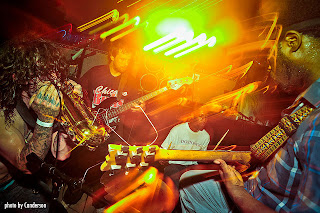 I am so damned keen to get my sweat, depraved mitts on the sweat, depraved Ohio band Puffy Areolas' sweaty and depraved second album, 1982: Dishonorable Discharge (a companion to last year's 1981: In The Army Now). Put out by the excellent Hozac crew, 1982 promises to be just as discordant, abrasive and electrifying as its predecessor. Don't believe me? Read the following press release then...

Puffy Areolas are a pummeling ensemble of free jazz skronk, laid mercilessly on top of a proto-punk nuclear waste dump, still throbbing with orgone energy. A Hawkwind cum-Lucifer’s Crank-era Dwarves killing machine that doesn’t stop until no one is left breathing, or god forbid, unimpressed. A sophisticated mess of noisy, nihilistic bursts of agony and intangible hate-fuck hysteria, that’s as captivating as it is alienating, pushing the boundaries of sanity, each and every performance. And yes, their second full-length is exactly what everyone has been worried about, a toxic bath of spoiled space juice dripping dangerously over the frayed circuits of their demonic WAH, sizzling with nightmarish night trips. A true Funhouse moment really kicks in on side B, a devastating document of human endurance, devolvement, and desecration, and sometimes it seems like this band is less of a musical combo and more of a flashing portal into an unknown Vietnam-like, mind-bending free punk power that summons the inner spirit of self-destruction like you wouldn't believe.
Once you tune your brain’s lower end into their freaked-out frequency, you’ll immediately FEEL THE NOIZE, and you’ll quickly see how those gut-churning riffs can peel the paint off the walls better than any crew of Ukranian contractors in this neighborhood. When Puffy Areolas tore down the house at the 2011 Hozac Blackout Fest, the corners of the Velvet Perineum were literally crumbling, rocks falling down in pieces, as they rode their wave of scorched-earth noise out into the charbroiled sunset. This band has a stunning power both live and on record, so don't be shy and come right up and jump in the fire with 1982: Dishonorable Discharge, the seediest head-blast of an album as you're gonna hear all year.

STILL aren't excited? Try out the title track and get ready to gnash your teeth in despair in arcane worship... 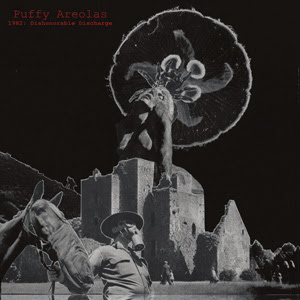 You can get 1982: Dishonorable Discharge from here - the vinyl comes with a free promo poster while stocks last.
Posted by Brendan T