Serving Up A Killer Smile 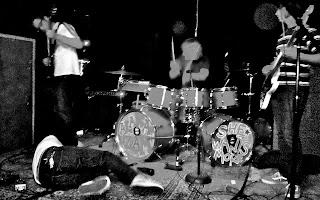 German record label Who Can You Trust? have recently released this delicious 7" by San Francisco mentalists with 70s rock embedded in their DNA, Hot Lunch. Their influences range from "Grand Funk Railroad, early Hawkwind, Lobby Loyde, Misfits, Crushed Butler, The Who, Blue Cheer, that very first Rush album, early 1980s skate punk, UFO, Ace Frehley, CCR, Chuck Berry, Gedo, Amon Düül II, Black Sabbath and Groundhogs" - phew! PLUS they are a fan of Skyhooks - SKYHOOKS! Jesus wept. They had me at "hello". But their proclivity for hot lunches (hence the name) shows a band that refuses to take themselves seriously, and in many ways this informs the music in a much clearer way than the earnest revivalists that litter the bargain basement bins. Basically, it's gonna set your hair on fire. I really am looking forward to what these ne'er-do-wells have in store for their incumbent LP coming out later in the year. 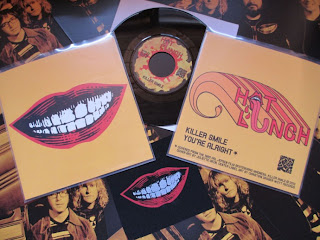 Killer Smile is out now - get it here.

Email ThisBlogThis!Share to TwitterShare to FacebookShare to Pinterest
Labels: Hot Lunch, Who Can You Trust Records