Here are two linked acts that are prepping amazing releases through Fat Cat Records this year. 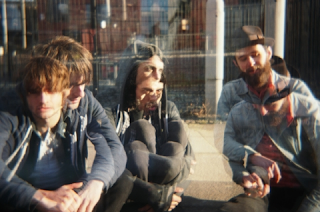 First up is another slacker rock album that owes as much to the 90s psych movement of the Dandy Warhols/Brian Jonestown Massacre era as it does to fellow revivalists like Yuck. Milk Maid are from Manchester (chief songwriter Martin Cohen used to be in the pretty rad Nine Black Alps) and Mostly No (their second after releasing Yucca only last year) is an album chock full of jangly guitar ramble and chunky guitar drive. I love me a guitar album. Yet I still think that due to trying to find that balance between the jangle and the crunch, the trio straddles both without embracing either, so things aren't as strong as they could be. It's not that I struggle with isn't that the trio aren't good - Mostly No is a pretty delectable album - it's that their name is too close to Milk Music, the Washington band that are one of the best things going around right now. So when I forget, or get confused, and hit up Milk Maid instead of Milk Music, I'm invariably disappointed. This isn't the band's fault of course, and Mostly No is an album that makes an impression, then falters, before winning you over in the end ('Do Right' and 'Bad Luck' are pretty killer). Let's hope the next one works harder to rock all the way through. 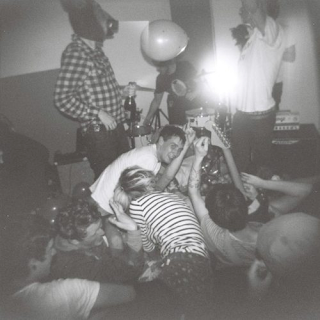 Much more upbeat are PAWS, a Glasgow based trio that dish out scuzzy garage fuzz with little regard for their own safety. They brought out their debut EP Misled Youth (in cassette form) back in May, and are quickly backing that up with their Jellyfish/Bloodline 7" (which rings of early Japanadroids, especially the A-side) in preparation for their upcoming LP Cokefloat! (which has been recorded and produced by Warm Brains' uber-producer Rory Attwell). I have to say that I'm a big fan - these two quickly constructed releases (everything except for 'Bainz' - my favourite - was written and recorded in under a week) allude to a world of promise.

You can grab all of these releases on the FatCat website here.
Posted by Brendan T