Half Man, Half Cop - All Slovenly HOBOCOP 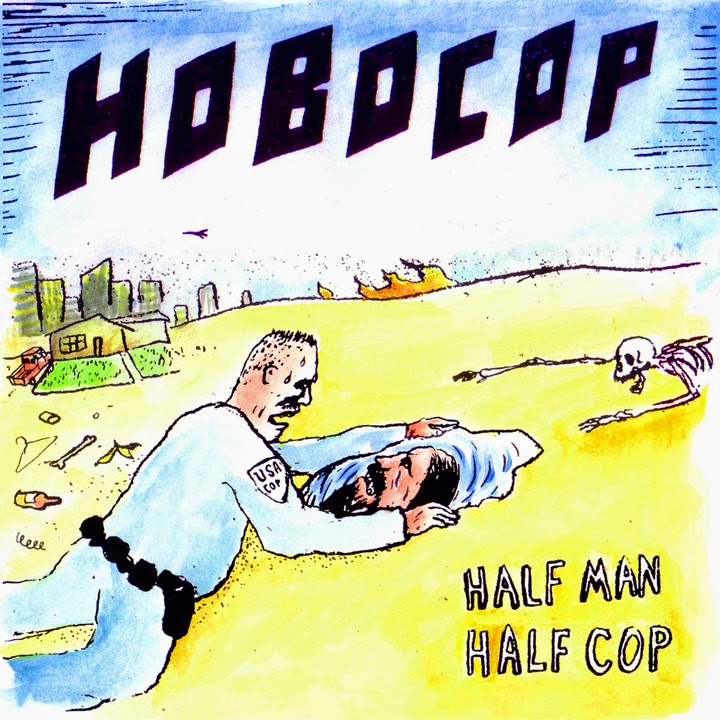 I am late to the party on this album (as I am with lots of things, due to being a slacker, but better late than never *insert cliche here*). But then again I'm not sure that anyone gives a shit about Oakland duo Hobocop (despite the myriad memes out there about this fictional take on the fictitious character), their Facebook page only has 70 likes (71 now after I discovered this fact) and no one is buying their Half Man Half Cop 10". Which is goddamned dumb, because this is one of those scuzzball releases that benefits from its serrated griminess, its puerile slackjawed affability, its lazy and barely contained feedback. There are tracks like 'Ponzi Scheme' that feels like a 70s Detroit blues punk discovery; other tracks like 'I Was A Beautiful Hippy (Now My Furniture Is Moldy)' have this motorik happenstance simmering as the skeleton of what occasionally erupts into a shouted lung hack, like a tired, cranky, Doors-binging Puffy Areolas. I love the hell out of it. It's something that grows on you like a fungus, and is just as difficult to get rid of. Probably just as unsightly too, but unlike a fungal outbreak, you are more likely to have sex with Half Man Half Cop on. Get it now through the ever excellent fuzz raconteurs Slovenly Records.