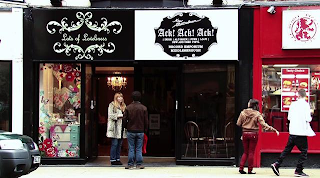 There once was a dude called Oli, who decided that living a normal, safe life wasn't for him. So he gave everything up - during the global financial crisis - and started an independent record store. Good move... Actually, it's worked out pretty well. Ack! Ack! Ack! Records in Middlesborough is a helluva solid store, with a beautifully selective yet diverse range of gear. If you're in that neck of the woods, definitely go there and blow your dough! 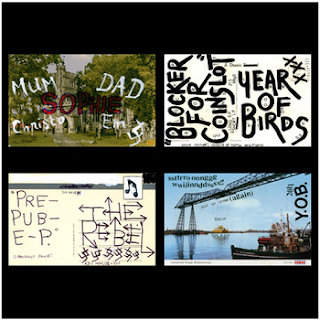 But he didn't want to stop there, having started his own label. Ack!Ack!Ack!'s first release is this 12" split for The Rebel (AKA Ben Wallers from Country Teasers alongside Sophie Politowicz) and newbies on the block Year Of Birds. The Rebel's side is called Pre-Pub, offering five slices of incredibly warped pop that mirrors Dan Melchior in sound and in content - which is basically saying it sounds like stripped back Country Teasers on crack... 'Pubgrub' even has pokies/tabletop video game music at the beginning, whilst most tracks use electronics in such an archaic way that it feels like you are in a carpeted bar from the early 80s - albeit with robotic, sex-crazed druggies with Casios being the barflies of choice... Then Oli's own project Year Of Birds attack with their abrasive and frenetic Blocker For Coinslot EP. Man, I really liked this. Think The Intelligence/A-Frames style blitzkrieg garage punk, but with a balance of dingy rust and debonair panache. Each song is bite size, and there isn't enough time to digest these bitter pills before the end is in sight. Then the drugs kick in, and you'll want to flood your senses with these tunes all over again...

You can grab this 12" here. Since this, Oli has put out a split cassette between Year Of Birds and Girl Sweat (get it here) and a compilation tape that includes Brisbane's own deconstructionists Sky Needle amongst many others. Expect some pretty rad things from Ack!Ack!Ack! in the near future...

The Rebel - Ball Breakers On Parade