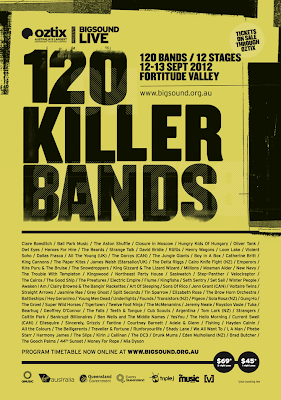 And so it begins...The 2012 Brisbane Big Sound conference and live showcase promises to be the biggest yet, and already is touted as the Southern Hemisphere's fledgling answer to SXSW. Big shoes to emulate, but there is credence in such claims. With the likes of Steve Earle and the like taking part in Q&As, panel discussions and masterclasses, it has the potential to be an industry icon - as far as that goes, I suppose. I for one can see why some people consider these kinds of things a bit of a wank, but it gets people interested in all facets of music, which can't be a bad thing.

But the most exciting thing about Big Sound is...the sound! Big Sound Live showcases 120 bands within a two block radius all playing over the next two nights. There are some amazing bands that are playing, some of which I have spoken about at length in previous posts (Violent Soho, Transistors, Kirin J Callinan, Velociraptor), but there is a huge list of great acts doing the rounds. Below is a "hitlist" of artists to try and check out. Have a listen, then if you are on the ground check out where/when they are playing here. Ill be around and about reviewing, taking snaps, and other things I won't dare to mention here. See you on the beach!