Pop In Some Strange Way 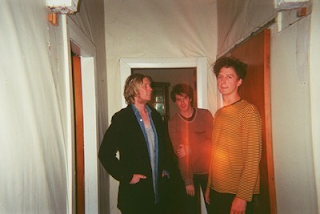 I had the pleasure of seeing Transistors play the Kiwi bash party pre-BigSound Live last night, and despite the short running time (15min or so) they killed it. If you managed to get tickets for tonight, they are playing at Ric's Cafe alongside Super Wild Horses and The Gooch Palms, and promise to be incredible. But this post isn't about Transistors, but another ace NZ band called Popstrangers, whose Happy Accidents EP back in 2010 I quite enjoyed (see here). It's been close to two years since I have heard anything new from these Auckland lads, but that doesn't mean they have been sitting idle. They have an album on its way that should smash up the beginnings of 2013 (as long as the Mayans don't blow up the world before then). Expect to hear a lot more in the lead up to this.

Popstrangers - In Some Ways
Posted by Brendan T