Tough Love Is Being Pulled Apart By Horses...For Free 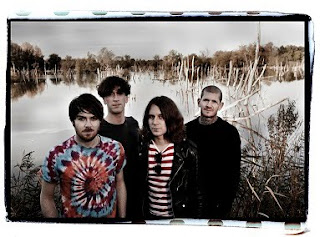 Some big news for Pulled Apart By Horses fans. Sophomore effort Tough Love is out today via Transgressive Records. Quick turnaround, seeing as their debut LP was released only last year, but many of the tracks floating about on that were pretty old. So this is very exciting indeed! But as ever the Leeds quartet like to throw in a curveball, and to celebrate the release of the album they are lending fans their new album via a unique facebook app: www.facebook.com/pulledapartbyhorses. Anyone visiting the band's page can borrow a stream of the album, which they can listen to for an unlimited amount of plays over the course of seven days. As even more of a thank you for their fans' awesome support, they can also receive an exclusive free download of V.E.N.O.M's b-side 'PWR'. More exclusive treats will be added to the app over the upcoming months. Direct access to the app here.
We don't do fully fledged reviews or articles here often - I leave that to my 2nd day job - but expect both in the upcoming weeks also. Times, they are a-changin...

If you are in the UK or are UK bound next month, PABH are destroying the following venues.