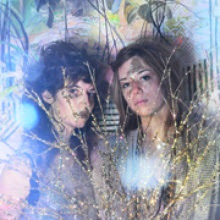 US psych-pop bedfellows SUN ARAW and PRINCE RAMA head down under this Summer for Sugar Mountain Festival in January, but can't get enough of Aussie sultriness, so are hitting Woodland tonight! The bands join forces for a kaleidoscopic double whammy, bringing their dubby dance jams and transcendental melodies in their wake. Prince Rama's Trust Now and Sun Araw's Ancient Romans were two solid releases of 2011, so this promises to be one hell of a show. Supported by one of Brisbane's best bands of the moment, Blank Realm, along with Rites Wild from Adelaide, and all for $20-odd, get to this show - your life depends on it. Tix can be gleaned here.