Do Away With The Rain With Sonic Masala Tonight! 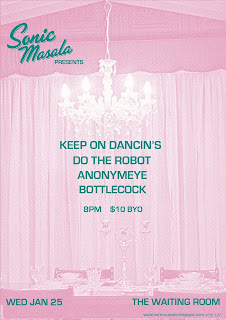 I may have laid dormant in terms of posts, but Sonic Masala has been movin and shakin in other realms, predominantly in the live arena. December's showcase featured a blistering set by high-concept grungers Sleepwalks, an intimate sojourn with Do The Robot, some cathartic meanderings courtesy of Nite Fields and some balls to the wall blues bust-ups from El Motel.

Matt & Sarah loved that show so much that Do The Robot will kick off proceedings once more at West End's The Waiting Room tonight in a pre-Australia Day knees-up. It's a holiday tomorrow, so why not start the celebrations early? Joining DoT are the glass-eating Bottlecock, the ambient tantrics of Anonymeye and the noir gleam of Keep On Dancin's. Once again it's all for a tenner, all for giving bands a chance to get paid for their efforts for once, and all really just an excuse to see bands I like whilst getting drunk for really cheap (it's BYO, doncha know?)

Fuck the rain. This party is where the shit goes DOWN.

Email ThisBlogThis!Share to TwitterShare to FacebookShare to Pinterest
Labels: Anonymeye, Bottlecock, Do The Robot, Sonic Masala Presents, The Keep On Dancins, The Waiting Room