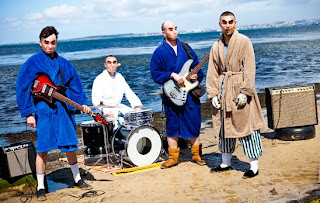 I have debated with my good friend Luke for over a year now as to whether the name of the below featured band is tongue in cheek brilliance or just plain shit. Regardless of the outcome of this rostrum, Ive been a massive fan of Eddy Current Suppression Ring for some years now. The Sydney, Australia four piece have been relentlessly touring their brand of skitterish turn of the '80s visceral punk circa Tom Verlaine/Television all over Down Under, and although they are yet to crack international fame they keep plugging away - and with their 3rd album, Rush to Relax, I hope they succeed...

The album finds them equally in 'if it ain't broke...' and 'the grass is greener...' modes. How can such a juxtaposition exist on one record? Simple. The short songs - like Anxiety, Walked Into A Corner, I Got A Feeling - are pure classic ECSR, short sparks of ranted/chanted/spat vocals, punchy guitar, simple yet energetic rhythm section. Anxiety seems a natural extension of vocalist Brendan Suppression's state of mind (at least on stage), his frenetic swaying and jerky movements belying a tortured soul, a musical schizophrenic. Yet the departure doesnt come so much from a different style so as a jamming headspace that sees songs like Tuning Out and Second Guessing extend over the 6 minute mark. The songs themselves are self contained ECSR songs, no question - but it also allows for the band to provide a more sonic, improvised sound. Some pundits have argued that this takes away from the inherent bluster and beauty that is Eddy Current, but I disagree - especially with Tuning Out, which provides a languid spacey jam in between Brendan's anxious ravings. It all ends with the title track, with rumbling drum and bass, insistent strumming and desperate vocals telling us to calm down and relax, the very antithesis of the sound invading the airwaves...before 20 minutes of crashing surf closes out the album.

Rush to Relax proves to be a great follow up to their first two albums, Eddy Current Suppression Ring and Primary Colours (both having garnered release hear through Melodic Records), a true testament to this garage punk band. And whilst they continue to garner plaudits in Australia (having won the Australia Music award in 2008 for Primary Colours; past recipients include the peerless Drones), the hard work and high-octane energy exerted at their live shows appears to be (finally) bearing fruition, as they have scored a support slot for Pissed Jeans for their US tour in July! So its time to get electrified...

NB. Ill be returning to Australia for a brief holiday in April, and ECSR just so happen to be playing - a review will be in the works...