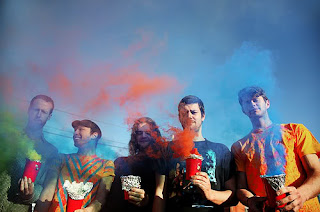 Fang Island describe their music as 'everyone high-fiving everyone'.

What an amazing way to describe the sound that they have created on their self-titled debut LP (put out by the tres cool Sargent House Records), a kaleidoscopic explosion of colour and sound, predominantly instrumental, occasional choral calls and hand claps notwithstanding. There are elements of a more laidback Lightning Bolt, a more streamlined Animal Collective, a less hairy '80s hair guitar band, a little Minibosses (except they aren't covering vintage Nintendo game soundtracks - they are creating their own) - hell, there's even some almost country and western guitar noodling near the end of the track Treeton! - but overall this album reeks of happy happy joy joy!

I was stunned when I gave this album its first listen - I had been expecting something more post-rock. Probably because I had been told that it was a post-rock album. This is something else altogether. The band manage to meld their musical talents into one huge collective of radiant positivity. With three guitarists weaving their magic, harmonising their twisted chords into a tapestry of uplifting 'high-fivery', the drummer and bassist struggling valiantly to keep the band centred before they float into the air and towards the sun, Fang Island never fails to impress. Every song punches you in the chest, a surefire arrow of good times sure to cheer you up at every opportunity. Its the feel good hit of...well, every season henceforth. The soundtrack to a heady fun-filled summer? The choice to help wipe away the melancholia brought forth by the shitness that epitomises the winter? Music to mark the moments as the shoots break through the earth and the sun starts to stir, the first signs of spring? A warm remembrance of good times past as the green turns amber and the leaves start to fall? Yep - its all right here. And its unrelentless in its catchiness.

Technically brilliant, relentlessly upbeat, Fang Island has in one day become my current frontrunner for best album of 2010. Get it, listen to it, make love to it, have a million of its babies. Then have them high-five each other - the most simple joyous gesture of them all.

Fang Island will be touring the US extensively later in the year with the likes of Red Sparowes and the Chinese Stars, and Andrew W.K. (?) joining them on stage on occasion, these guys will be huge. You heard it here. Have a taste of their single, Daisy, and another track, Life Coach.