The Glove Fits #1 - The Warlocks 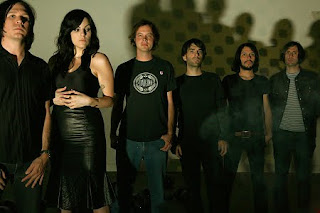 Every Friday Im going to be posting a song that sits in the annals of MY music history as either pure genuis or a reflector of a major experience in my life. Paul and I started up Sonic Masala in order to continue our quest to celebrate the music that we like, and that hopefully you do too. But a major aspiration of this blog is to reach out to you, the reader/listener, and hook you onto your new favourite band.

Hence the first track I am presenting. I had never heard of these guys before 2002. I walked into my local record store - Rockinghorse Records in Brisbane, Australia - and had a surreal High Fidelity moment - the track came over the speakers as I entered the shop, and I could just about see the carrot being dangled in front of me as the disillusioned employee muttered, 'Ill sell 5 copies in the next 15 minutes...' I stormed up to the counter and demanded to know who had concocted such brilliant mesmeric psychedelic rock???

The answer - The Warlocks.

But, believe it or not, the album that the song came off - their 2nd LP, Phoenix - was out of stock except for the one playing, that one of the employees owned. So I settled for their 1st record, Rise and Fall. Sound unheard, I raced it home, put it into the CD player (despite my housemates watching some shit on MTV), cranked up the volume - and almost shat myself. Ever since I long for the day that I can commune with this 7-11-piece (its forever evolving), 2-drummer, 4-guitarist behemoth of a rock beast, producing a relentless, hypnotic wall of sound so that I may curl up in their shadow and sleep eternally in their smoky embrace...

Oh, I also failed to mention that this was in the midst of my heaviest bong days.

Nevertheless, The Warlocks are genuis, and despite threats to break up, they still prowl around the US doing shows. Until you are lucky enough to encounter them, have a listen to the first proper song I heard of them.

The Warlocks - Jam of the Witches
Posted by Brendan T

Email ThisBlogThis!Share to TwitterShare to FacebookShare to Pinterest
Labels: Phoenix, The Warlocks Rise and Fall