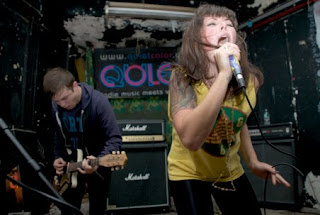 Here's something I havent been able to get out of my head this week. The Sleigh Bells are essentially a boy/girl two piece outfit from Brooklyn who have recently brought out their self titled debut album. It opens with 2HELLWU, a simply orchestrated piece of mostly snare, soft jangling guitar and angelic vocals. Oh, and handclaps. And finger clicks. The human percussion continues throughout the album, but the simplicity does not, as the 3rd and 5th tracks Crown On The Ground and Infinity Guitars attest - the former holding a Yeah Yeah Yeah's style riff before cascading in a cymballic bombtrack highlighted with a synth assault; the latter holding a gritty Kinks All Day and All Of the Night riff, thick bass drums, some ah ah ah's, actual sleigh bells and catcalling with attitude. A/B Machines feels like a bizarre mix of Joan Jett, Peaches and MIA, whilst Ring Ring has a distinctively Beta Band circa 3 E.P.s feel to it, with Alexis' sweet voice melding with the looping acoustic guitar and clicking fingers. Yep - did I hear 2010's Tilly and the Wall? It sounds like a catastrophic clusterfuck of a faux cool disaster. I think its mega rad of death - but will they stand the test of time? Hmmm...who cares, Alexis is fucking hot...

The Sleigh Bells are playing a series of dates in London in March, so make sure you don't miss them...