Nothing Dumb About These Golden Numbers 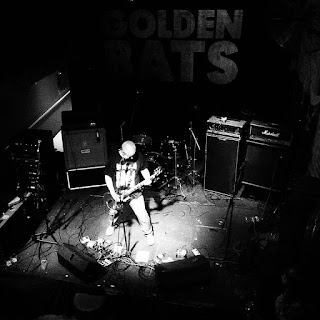 Good dude Geordie Stafford has been a mainstay in the Brisbane hardcore scene - his efforts in Dick Nasty and Teargas in particular leaving indelible claw marks across the underground. But he found it easiest when he worked on his own - his lone wolf approach to doom metal, Golden Bats, has been incredibly prolific, having put out six self-titled EPs, a few 7"s and some split releases with the likes of Pale Earth and The Steady As She Goes.

He was also involved in the Tym Record Club, where the seminal label put two likeminded artists on flipsides of a 7". Golden Bats' effort sat alongside Adam Harding, a similar Australian rock journeyman who started performing under the moniker Dumb Numbers. Harding has the Midas touch, and on his second album has roped in a who's who of rock and metal royalty to help out (including members of The Melvins, The Jesus Lizard, Einstürzende Neubauten and Dinosaur Jr) - including Monsieur Stafford, who lends his axemanship to 'Unbury The Hatchet'. This song alone also features David Yow on vocals, and Alexander Hacke with keys and throat singing (!). The album itself predictably slays, of course, but I can't be any more stoked for Geordie (and Adam, of course) on this one. Grab Dumb Numbers II here (in purple vinyl no less), listen to the track below, and the entire album below that.