No Matter the Title - We're All Dead 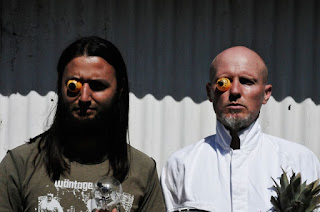 Shirking the shackles with Guitar Wolf not enough for those five people out there that have been wondering what we on Planet Masala have been doing since May (outside of a little festival back in August)? How about some slow, loose, punishing Dead? That's right, the Victorian duo (although a trio in this recording) have another destructive LP out in UNTITLE (out through their We Empty Rooms label now). It's spare yet unsparingly brutal, with a desiccated tongue planted firmly in their rabid cheeks - the Melvins connection stand present and accounted for. Listen to the wild psych-loded meltdown at the end of 'Don't Pray For Us' and the chime that peals out amidst the chaos echoes like an impatient bell in the foyer of the gates of Hell, the boys eager to bludgeon their way in. There is the lurking 'The Kid Was All Wrong' (apparently in three volumes) that struggles to start, then stop, an anti-song to show us that patience isn't always a virtue (even at 4 and a 1/2 minutes); the doom howls of 'Turning Screws' turning into something more lean and muscular, horror tropes peering out like a dead eyed Alice Cooper a la Prince of Darkness (the trick is in the name); for me there is even a little prog amongst the free-noise stutter and drone of closer 'Line 'Em All Up' (with haunted choral ushering us out into the depths). I still circle back to opener 'Grizzly' as more "quintessential" Dead fare - mainly for the phantasmal explosions of noise that we are assaulted with that we are tortured for our sins for. That's all very well - but Dead aren't finished. This (after Collective Fictions from earlier in the year) is to be the second part of a trilogy of four ("a trilogy, but better") - there is more to come. We are all Dead.