James and his Boydoids Get Super Low, And Awesome 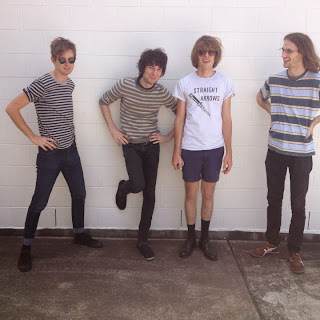 That crazy Brissy miscreant James Boyd hasn’t been gracing our sleazy streets for some time – he was left behind in Europe after the Velociraptor summer tour (some say deliberately). He left us with the absolutely incredible self-titled cassette, showing he is a man that truly knows how to write a jaw-dropping lyric, and surreptitiously blending them with seemingly simple pop compositions and seemingly blase, tone-deaf vocal delivery, to create a plethora of deceptive raucous gems.

The shift to the other side of the world hasn’t shifted these innate elements, or Boyd’s burgeoning blitzkrieg of creative activity, as here is a new album, Super Low. And guess what? It’s fucking amazing too. 'Lizzy Killers' gives it away that Boyd is sequestered away in the UK, a crawling downbeat stream-of-consciousness ramble. Then along comes the darker ‘Side Street Blues’, and goddamn if this isn’t one of the best tracks I’ve ingested this month. 'Frustrated With You' is a ruse, seemingly lifting the gloom but settling for weary chagrin in brighter clothes. There is the slightest increase in fidelity, but don’t fear, the tracks on Super Low are super ramshackle, warming the ears, the tongue and the cockles all at the same time. Can someone please shine a light on this guy? Maybe get him to ghost write Paul McCartney’s next record – God knows he has lost his way?

I've just landed in ol’ Blighty, and I see that Boyd and his androgynous Boydoids are haunting Edinburgh. Come on you Tall Thin Duke of deadpan malaise, come at me. Play 'Brisbane' so I can get nostalgic after being here just for a week – I dare you.