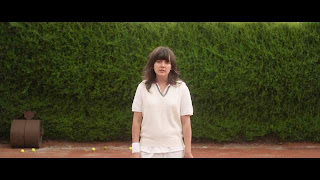 Whilst my other two top 10s will be a bit more definitive, here are TWENTY songs that stuck in my head a lot this year - whether they are the BEST twenty is of contention, even with me. Ah well, let's have at it then...


As if a list of songs from me wouldn't feature Mogwai. This song has taken a lot of people by surprise - but this is Mogwai now. And I can deal with it. Very much. This track is just as dark as their transcendent white pulse nightmares of Young Team, just from a different sonic universe.


This isn't the best song from these guys, but they were excellent fun at the dire Splendour In The Grass this year, and Ron Swanson pisses on people. Fin.


Chiptune guitar pop whimsy? That mosquito buzz at the beginning is painful...but give it a few seconds, and for the live instrumentation to crash on in, and everything makes sense. I'm stuck in a 90s 8bit skateboarding RPG!


I am so proud of these boys and their new album Hungry Ghost. I would have this at the top of every list if I was ten years younger - effervescent, virile grunge rock played at maximum velocity. The fact I still think it's a great album even when I rarely visit these realms anymore is a testament to its success. I've seen them play live four times this year alone and I felt the years melt away every time. And they are the best dudes on the planet. Keep killing it guys!


Porches.'s album Slow Dance In The Cosmos makes me wish that the Wolf Parades of the world hadn't gone so quietly into the dark dark night. This isn't slacker territory; just classic cracked intellect guitar rock. I love it.


This foray for Benjamin Thompson to step way from the introspections of The Rational Academy continues to sprout myriad legs, and this track of the decidedly left-field Coral Corral release is the culmination of his propensity to push himself to the outer limits of his abilities, and then some. A track that may not be brilliant, but to me is a true testament to a work in progress; a stepping stone into the stratosphere.


Not my favourite track from the trio's debut album Nuclear Winter, but it's a live staple, and this insane clip that accompanies it elevates it to cult status. If you don't feel a rush of blood to the head when listening to Batpiss, you are probably dead. Or at least about to be.


A split with No Anchor is never an easy ask to stand out on, such is their brutal brilliance, but the underdogs of the Australian noise rock scene easily usurp their brethren here. Why isn't everyone championing these guys? With the amount of dark and twisted rock coming out of the bowels of our country, surely it's about time that people sat up and took notice?


The longest track on the Irish band's new album, and for me the best by far. I really enjoyed the album, but it didn't stick with me as much as this song did.


A small band from Knoxville who delivered what was the most listened to song on my playlists this year. Bizarre but true. See if you can ignored the sleepy, deceptive hooks. I can't. Shit, I'm listening to it on repeat again...

A cut from the Brooklyn band's In Limbo recordings. That was a great album of 2012, yet it baffles me how this didn't make the cut, even as a longwinded outro. All cyclical psych, all killer.


Probably not the best song Per Purpose put out this year - 'Warburton' was amazing, as is most off their new (and missed out of my year review yesterday) LP Circle The Stains - but every incarnation of the band is present and accounted for in this nine-minute dirge. Caustic brilliance.

The excellent Baltimore punks called it a day last year, then surprised us with a posthumous album, 333, in time for Record Store Day. This is a fitting farewell if I've ever heard one - Nolen's vocals say it all.

7. Pissed Jeans - You're Different In Person


The irascible howlers slayed it once more with new album Honeys, and this is the track that buried its sordid hooks furthest into my soul this year. It's typically dirty, raucous, serrated and blackly funny. You just can't fuck with this.


Alanna McArdle might be more recognisable as part of Joanna Gruesome, who brought out a great LP this year. But it's her solo endeavour Ides that moved me most this year, and 'Prisms' really slays me. Every time. I cannot listen to this without getting whispers of the maudlin shakes and the longing that love and the loss of it can bury within you. Hauntingly beautiful.


I'm sure most of you won't agree with this one, but this track was played ad nauseum for weeks on Planet Masala. It's like a voodoo mantra, maniacal in its bubblegum hooks disguised as dark motorik. I'm not sure if Totem will ever match the heady heights of this one song, and I'm not sure if I care. This is enough.


A lot of great experimental and drone music crossed my desk this year, and there are so many tracks that I return to in my dark den of iniquity that its unfair to focus on one. Yet 'Agrimony (Porch Music)' is one that took me completely by surprise, and I find new pieces of beauty in it with each listen. A great improvisational track, and one I never want to end.


I could have this here for the video alone. I interviewed Leroy from the band earlier in the year for a national magazine and it was a lot of fun. The fact that their LP NOVOs isn't a complete shambles but a combustible ball of playful energy and soulful intent is a further surprise. This track, though - quintessential party music. Well, a party in a grimed-out Queenslander with holes in the shirts and bottomless cans of beer. So, my kind of party then.

This is a fresh one, but the Carney brothers are in my opinion one of the greatest psych rock bands going round. Why? Because the emphasis is on rock. Every album they have put together is strong, and 'Innocence' intimates that the next one will be a killer as well. All together now...'WAAAAAAAAASTED!'


This is the only song that is solidly in place as numero uno. I have loved this song ever since I first heard it. A woozy guitar track that feels country and slacker at the same time; Barnett's hilarious lyrics about a panic attack are prescient, acerbic and, whilst delivered in a flippant way, are defiant in the way they shape who Barnett is. No pretentions here, just a meteoric talent on the rise.