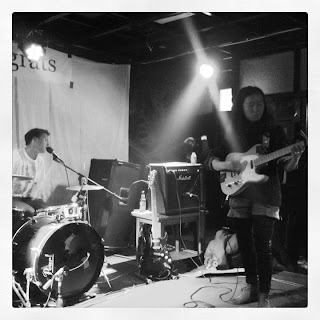 Got this self-deprecating email last week from Pairs, an intense two-piece based in Shanghai. The band is one of opposites – boy/girl (Xiao Zhong on drums and vocals, F on guitar), Australian/Chinese, nihilistic/silly, angular/pop “that goes alright sometimes.” At times Xiang’s vocals are droll, a plaintive Australian drawl a la Brendan Suppression, whilst the musicianship hinges on F’s gunshot switches from slacker strumming to squalls of white noise, Zhou’s drumming hovering between a tight metronome and a sledgehammer.

Pairs have been fairly prolific, putting out a live recording, an eight track album and a double LP in the past few months, whilst they have dabbled extensively in videos and various formats (vinyl, cassette, CD, DVD, USB). They have come close to Aussie shores, having toured New Zealand thanks to SM mates MUZAI Records, whilst spreading their wares to much of Asia. They are intrinsically tied to China though, being part of a dun Shanghai that may be small but with enough bouncing off the walls to constantly refill the creative well.

But what do they sound like? Well, in the past the band have slated influences such as Royal Headache, Die! Die! Die!, Batrider, Kes…and Jason Molina. Seriously. And to be honest, there are moments on tracks such as ‘Cat Food’ from their If This Cockroach Doesn’t Die, I Will double album that I can take the bait. There is lo-fi slacker pop requiems to be taken, but in the main this is zany art noise with extra crunch (like those moments in Shooting At Unarmed Men when Jon Chapple nailed it – that was hit and miss, but Pairs get it closer to the mark) – which is built into my lifeblood.

Head over to Pairs’ Bandcamp to sample/buy any/all of their releases. Sonic Masala would love to get these guys to come to Australia for a tour – leave a comment or email them me if you agree!

Pairs – Gig Of The Week (from Grandparents)
Pairs – Mean Buzz (from If This Cockroach Doesn’t Die, I Will)
Posted by Brendan T