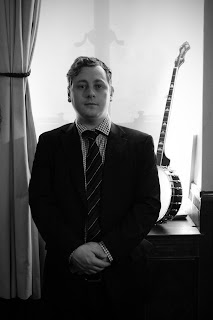 Sad news. My good friend Andrew Tuttle is retiring! Well, that’s not true at all – but after almost 9 years, three albums, and lots of EPs/splits/compilations etc, his musical moniker Anonymeye is being laid to rest. He has been a staple to the Sonic Masala cause – he’s played a couple of the Sonic Masala Presents showcases, as well as DJing at one, and has been a constant source of inspiration and laughter.

He’s not finished with music, not by a long shot – he’s got plans for further endeavours on top of becoming co-director of purveyors of all things left-field in Australian music, New Weird Australia.

Tonight is the Anonymeye swansong. Come to the Underground in the Fortitude Valley from 8pm to see him off. He’ll be selling some of his music, and having a good time to boot, come and join in. Excellent support from Pale Earth (Ben from Rational Academy) and Oscil_Ether. Also, it's BYO. I implore you though - bring tallies. Its how Anonymeye always wanted it...