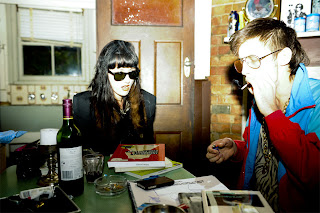 Ex-Con came to be after Joanna Nilson (Butcher Birds) and James Dalgliesh (Slug Guts) got together in the feverish, nightmare-inducing humidity of a a Brisbane summer awash with monsoonal floods, kneejerk alcoholism and an inexplicable anxiety borne of idleness. The first combination of the band also included Cat Maddin (Dreamtime) and Alex Dunlop (Keep On Dancins), captured on their debut self-titled 7” (out through Bon Voyage).

Recorded live by Blank Realm’s Luke Walsh at the now defunct Woodland Bar this time last year (apparently accompanied by a bottle of Captain Morgan, a Holy Grail reverb pedal and some extra long Rizlas, these 3 tracks are icy fingers dug deep into the skull, tetanus behind the eyes, eczema for the ears. Nilson is at her best when she sounds tortured, and here she moans, screeches and howls like a death wraith with withdrawal symptoms, backed by barbed-wire noise and production-line industrial drum disorder. It’s a nasty mix, yet the heritage here (plus the feverish connection to the “Sunshine” State) gives it the rusted barbs to stay stuck in the flesh for a long time after the last note has been flayed. 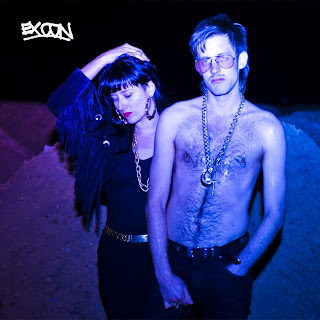 Ex-Con comes out on Monday, and can be pre-ordered here. Nilson and Dalgliesh have absconded to Melbourne, and now have a new rhythm section comprising of Steph Cola (Spite House) and Andrea Blake (Chrome Dome).