We Are The Hold Steady 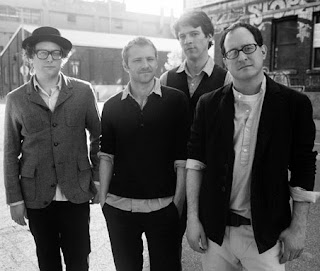 Sorry about the late post here people. The Hold Steady played at the Zoo here in Brisbane last night - I know, whats the point of telling you if its already been? Well I only got my ticket on the door late in the day, and I was also busy with study (after eating pan fried chorizo and watching Black Swan, of course). ANYWAY, it was the first headlining show that The Hold Steady have done in Brisbane - and it was fucking amazing. Craig Finn is the most charismatic guy, his songs a boozy psalms - he even put the ashes from a cigarette on his forehead to mark Ash Wednesday! But is not doing his yearly Lenten duty of kicking the booze - as he is in Brisbane! The band played just about every hit they have and then some. It was crazy good. And I am wholeheartedly converted.

(NB - this post is pretty much for the people who saw the gig last night. My body, mind and soul is still recuperating, as will theirs be. Still, enjoy the two tracks below!)

Email ThisBlogThis!Share to TwitterShare to FacebookShare to Pinterest
Labels: The Hold Steady, The Zoo