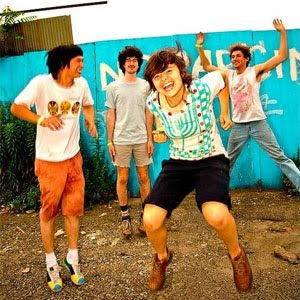 The indefatiguable Ponytail have just released a track from the upcoming album Do Whatever You Want All The Time (out on We Are Free). 'Easy Peasy' is just over six minutes of beautifully quirky spazzpop, as only the Baltimore crew know how to do. Its giddy, breezy, intricate, whacked out, and blissfully energising - that obnoxious pink bunny doesnt stand a chance when Molly Siegel and co are champing at the bit to pogo around ad nauseum. Its listening to this though that gives one an uneasy feeling - with a track this good, and a potential killer album just around the corner, will we ever get to see it be played in the live arena? Dustin Wong has been adamant that Ponytail is being put to bed - but we can all hope, right?

And get a double dose of the easy peasies, with this very cool music video - Im puttin my shades on...

And finally, go visit the We Are Free website - the opening page is pretty funny, yet also optimistic.