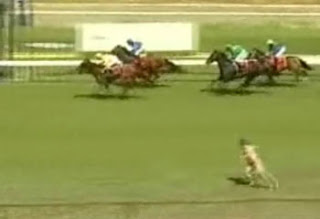 Here's your double dose of Hits From The Box action! I have to admit I wasnt sure if I would get here in time - speed drinking the afternoon away whilst looking at ridiculously dolled up boys and girls played at sophistication whilst horse with little midgets on them tried to get away from other horses with little midgets on them tends to be a time-consuming effort. Still, here I am, having risen from alcoholic stupor to thrust six delectable slices of musical Lifesavers down your goddamn gullet. You will eat it and you will like it! (Shit, I need to go to bed...)

First cab off the ranks is 'Dance More' by The Dogs, an art pop number that is decidedly anthemic despite its indie nerdery. The Chicago quartet have been two-stepping to Neil Young since their teens, and now have an album out called Camping, an album that is vibrant and decidedly hi-fi despite it coming about despite distance (all four members were spread through the US and, in Rivka's case, Norway) and being completed via microphones and laptops. The funny thing about this track was that I felt ashamed to find my first reference point being none other than Third Eye Blind - then found the band referencing them in their own press release. Believe me though, give this a chance - it works despite its apparent faults, there being more of a hint of love for far better songsmiths than those semi-charmed wankers...

NewVillager have carved such an effective track in 'Lighthouse' that I have had it on steady rotation since putting it on last week. NewVillager is apparently a multimedia outlet for Ben Bromley and Ross Simonini, who use various mediums to translate into an experience what they refer to as the NewVillager "mythology", a ten-part cycle exploring transformation, teenage-hood, and the formation of new ideas. Now I dont know about any of that, but I do know that this song and its accompanying video are amazing - joyful, effervescent, decidedly wacky - and thus NewVillager is well deserved of your time.

NewVillager - "LightHouse" from stereogum on Vimeo.

href="http://germanerrormessage.bandcamp.com/">German Error Message is a Tennessee folk act (AKA solo project of Paul Kintzing) that has just released After The Warmth, a lovely CD-R that complements last year's To Carry Alongside (and can still get for free at his Bandcamp site here). The tunes fit side by side with the likes of Willy Mason and Jose Gonzalez, yet the lo-fi nature of the recordings actually stands to enhance the ethereal structures of the songs. Its a lovely sound that I sincerely hope we hear more of in the near future.

Calgary's Lab Coast make excellent, poppy, beautiful songs – offering a fun juxtaposition to dissonant sonic noise and softly sweet choruses that you can tell these guys want to sound hard and be pop idols in the same breath. Its an endearing quality that helps to amplify the success of their tunes. Their album Pictures On The Wall is available through Eggy Records - and it is really quite good.

Bursting out of Baltimore are The Flying Eyes. The band shares Sonic Masala's love for psyched out music, citing the likes of Dead Meadow and The Black Angels as pivotal influences on their sound. They've just released their debut LP Done So Wrong (through Trip In Time and World In Sound Records), and its solidly steeped in psych rock tropes and colloquialisms - thus if you are a fan of the genre, you will like what is on offer without a doubt! They are currently touring through Europe, but unfortunately are not making a pitstop in the UK. Still its only a hop, skip and a jump over to the likes of Germany - check out their site for gig details...

The Owsley Brothers is the name under which J. E. Reynolds plies his musical trade, offering up slices of sinewy blues on upcoming album Separated At Birth that are as stirring as they are jauntily haunting. The greatest element that Reynolds gets right here is the sense of gothic poetry permeating Southern blues - and he nails it, especially on the track 'Faith In Me'.

There - two six packs of new music to get you through your weekend. Happy Sunday!
Posted by Brendan T