I Hate Everything About The Bar, Except The Music, The Smoke And The Booze...Siam Reap Style 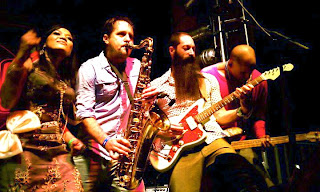 Cambodia isnt usually where you'd seek out sleek psych-tinged garage rock, but its about time you did so.

OK so Dengue Fever arent technically from Cambodia - they hail from LA, and only lead singer Chhom Nimol is from the Asian nation - but it is clear how much Eastern influences have been infused into every aspect of this bizarre concoction. 'Cement Slippers' has some great girl/boy vocal dynamics and free-form jazz horns, exotic erotica and a beautiful chorus that really hit me like a New Pornographers cast off - its great.
Dengue Fever are releasing Cannibal Courtship on Fantasy Records. Its their 4th record, and heightens the surf swamp soul that they have made their bread and butter. Whats beautiful about this track is just how much fun it is, and that is the exact intended purpose.
Another cool aside - for the upcoming Record Store Day, they are releasing rare vinyl versions of the album, and hidden within five of these will be a special handmade golden ticket that offers access to any show headlined by the band this year! Nice...
And they featured on the soundtrack for Jim Jarmusch's Broken Flowers - nuff said.
Dengue Fever - Cement Slippers
Posted by Brendan T