Bringing Back The Love 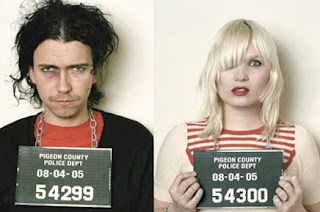 Wowee Zowee peeps! Sorry about the downlay in musical mayhem here at Planet Masala - its been quiet here due to the ridiculousness in the "real world" (AKA I accidentally maxed out the home Internet fund - sorry Luke and Sal...) Plus searching for work, getting work, getting more work, getting heaps of work, and uni has meant that I was on the cusp of believing I had too many fingers in too many pies. But if there's anything that those cinematic genuises behind American Pie taught me anything - and they taught me a LOT - its that you can NEVER have too many fingers into too many pies - you just combine it all in an orgiastic piefest (I think - maybe if I had caught the fourth and fifth sequels Id understand more...)

SO I am rorting the university by using their sizable Internet access to keep the SM dream alive. And as this has been some time in coming, here are a few tracks for you to sink your teeth into.

First up there is The Raveonettes, whose Sharin Foo is still hands down the hottest woman in rock. It helps that their first EP Whip It On is one of my all time favourite releases EVER. Really. Anyway, their fifth album Raven In The Grave comes out next month on Vice, and if this is anything to go by its going to be another hit, especially after hearing what other member of the due Sune Rose Wagner thought of its genesis:

"I think we have finally hit on something quite important and different for this album. This is the first Raveonettes album we've done which doesn't feature the signature Raveonettes surf drumbeat. None of the tunes have any real sunshine to them. It's all very un-Rave. It has a mood of ethereal defiance. It's dark but not bleak, like the single minded determination caused by crisis that is not quite hope but just as powerful. It's the perfect winter soundtrack just in time for spring."
The Raveonettes - Forget That You're Young
White Denim are another band with a hotly anticipated album in the wings. Gorilla Vs Bear have named them the best band at SXSW for the fourth consecutive year - a bit of love there mayhaps??? We've already sampled 'Drug' from D here - now try "Anvil Everything"!

White Denim - Anvil Everything
One of my favourite finds of last year was Tampa nutjobs Merchandise, whose dark distorted pop has entranced me for some time (check out my thoughts on last year's (Strange Songs) In The Dark LP here). They have just released a 7" on Katorga Records, Schoolyard b/w Graveyard, showcasing an amazing remix of the A-Side which has me even more sweat-lathered. These guys know how to weave a warped rhythm, and with the beats interlaid here they have a bona fide club hit - from the guys responsible for Cult Ritual? Anything's possible...
Merchandise - Schoolyard (Club Mix)
A band doing amazing things this side of the Equator is The Middle East. The Townsville, Queensland quintet have a cultivated, lush ambient folk sound with the slightest tinge of darkness, and its been going down a treat globally. They are releasing I Want That You Are Always Happy on Spunk Records April 8th, and "Black Death 1349" is off it. (Can you tell this was recorded at Midlake's Denton, Texas studios? Nah, me neither...)
The Middle East - Black Death 1349
Darlings are a NYC garage pop band whose song "Spit It Out" off EP Warma (out now on Famous Class Records) has been on incessant replay since the SM downtime, so was pretty much a sure thing to be on this lil playlist. Its decidedly heads in the cloud whimsy crossed with Pixies nerd punk, which has helped get me across the line on a few days this past fortnight.
Darlings - Spit It Out
"Zeppole Ben" is off Hello, Nice Evening. We Are The Everymen, an EP by The Everymen (weirdly enough). Its two and a bit minutes that reminded me of why Rocket From The Crypt were great. The rest of the 7" is radness - lots of different genres (with help from Kurt Vile no less!) all infused with cigarettes, sweat and more than a few regrets, readily forgotten...but I like it most when Sarin McHugh is shredding his vocals to next to nothing Buy it here.
The Everymen - Zeppole Ben
Last on the comeback playlist is a band that many have been biting their nails to the quick in anticipation for, Crystal Stilts. Their Alight Of Night was at the very crest of the lo-fi, scuzzy as fuck euphoria of DIY noise pop shenanigans. Now we get to see if the lightning can strike twice, as In Love With Oblivion comes down out of the sky April 12th. Its a Slumberland release, so that will tell you a lot with what to expect... Also, here is the admittedly perfunctory video to accompany the song "Through The Floor"... (Also the Brooklyn band are playing Cargo in London March 30th - although it appears to be sold out!)
Crystal Stilts - Through The Floor


Crystal Stilts "Through The Floor" from Slumberland Records on Vimeo