No Absence Of Hyenas Circling This Snowman 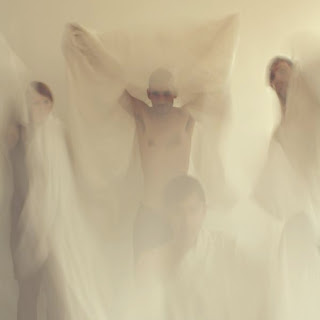 It was incredibly sad news when Perth via London quartet Snowman announced their indefinite hiatus earlier this year. I am a massive fan and have seen them on a number of occasions, including their stellar support slot for My Disco (see our thoughts here). Something that lessened the blow was the announcement that they would still release the hotly-anticipated follow up to 2007's The Horse, The Rat And The Swan. It's called Absence (poetic and prescient), and here is the first track off it, 'Hyena'. Classic Snowman here. Ill let Joe McKee explain a bit more about it all:

“The ideas grew from months of travel, being away from home and its comforts/familiarities. I ended up back in London with a wad of about 30 postcards I’d collected by various photographers. They all contained a similar mood, an un-nameable emotion. There was something both unsettling and soothing about them. There was an absence of something in each. A longing for something that no longer exists. I wanted to capture that emotion in an audible way as it seemed to capture that dislocated feeling we were all going through at the time.
The album was written primarily in a flat in Walthamstow E17. Perhaps we were trying to channel the East17 spirit in our music. It truly was a house of love. We wanted to write something cathartic. We didn't want to repeat our previous album The Horse The Rat and The Swan. We trod that ground and wanted to keep moving forward. Throwing ourselves into the deep-end and trying to swim.
Absence is more seductive and more giving than the last record. It is a romance with fading memories and lost loved ones. It is a communication between the living and the dead. A séance of sorts. It's about tearing yourself away from the things you love in order to progress and to move forward. Killing the myth...an eventual 'coming to terms' and letting go of all of these things. All things must pass. Change is inevitable.
We were becoming increasingly aware that Snowman was on her last legs. So the album was shaped as a parting gift. A swan song of sorts. A 'hometown farewell kiss'. All these feelings are wrapped up in a story of two lovers. One passes away and the other tries to communicate with the others ghost. I sing from the perspective of the woman, the man and a third 'ghost' character. This loose theme gave us room to say everything we wanted to say about our relocation/dislocation and struggle to communicate with the past.
The sounds and the textures created mimic these feelings. We wanted to wash away some of the shards of glass. We created clouds of chords instead. We wanted it to sound like a fading memory, or like time gradually slipping away and eventually dissolving. Aaron (Cupples) has a wonderful way with gadgets and sound.
We fed lots of the sounds through a tape deck to help disintegrate them. We actually recorded the whole album, in its entirety, TWICE. Then we chose the bits we liked of each and remixed it and mashed it up. It was therefore, a rather long and convoluted recording process....hence, three years passing by between records.
Absence is our sunset. It feels like the perfect way to end our trilogy of albums. It completes the triangle."
Sad, but poignant, and thus marks Absence an album to be looking forward to.

Email ThisBlogThis!Share to TwitterShare to FacebookShare to Pinterest
Labels: Snowman