Its A Battle Getting This Glossy Ice Cream 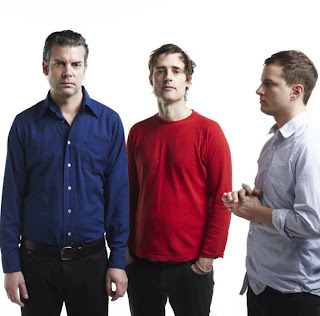 After the fears that Battles were no more after Tyondai Braxton walked out to do his own thang last year, it appears that the experimentalists are going to hit 2011 fucking hard. Having recorded the follow-up to 2007's seminal Mirrored with a handful of rock's weirder cohorts - such as Gary Numan, Kazu Makino of Blonde Redhead, and the legendary Yamantaka Eye of Boredoms - Gloss Drop promises to be just as top-heavy on insane instrumentation and bizarre yet infectious beats. And first listen 'Ice Cream' is decidedly weird in all the right places - almost like getting 311 to play some beats over the top of a jam session with Deerhoof and Ponytail, with Dave Sitek twisting the knobs in the production room. Skewed doesnt even begin to translate. What does though is that the June release for Gloss Drop is too far away! And they are touring every bloody where over the upcoming 9 months, including a spot of curation for ATP at the end of the year. Saweet!
Ice Cream (Featuring Matias Aguayo) by BATTLES
Posted by Brendan T

Email ThisBlogThis!Share to TwitterShare to FacebookShare to Pinterest
Labels: Battles