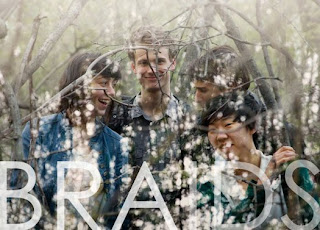 I was willing to dismiss Braids on the notion that the advance hype surrounding the release of Native Speaker was so large as to almost guarntee that it was overblown and likely a massive disappointment. Yet in the space of two days a few weeks ago I was forced to rethink my admittedly baseless assumptions when I was shipped the album to review for a magazine as well as the video sent as a thank you for a favour I did. Now Tanya, Im not sure whether sharing a Youtube clip actually works as payment for services rendered - but I am in your debt, as the song is fantastic and is guaranteed to get into your head. The clip is decidedly Animal Collective oriented (one post on YouTube stated that "no vaginas were harmed in the making of this video" which made me lose it for some reason...), but really the comparisons should end there. Just listen to it then get over and buy the album - its a good un.
Braids are currently touring around the US with Toro Y Moi. They will be stopping over at the Lexington in London on May 24 - tickets available here.