ANOTHER Six Organs Of Admittance Album? Well I Never... 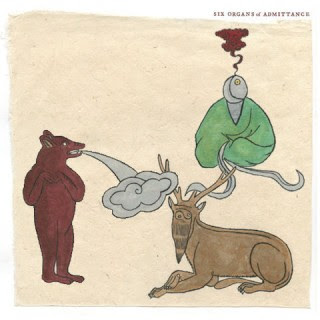 Six Organs Of Admittance, AKA Ben Chasny, pretty much fits the epitome of the term "prolific", having released over a dozen full releases and countless others when collaborations and split records are concerned, with the sounds crossing the thresholds of avant-folk, veering like an unpredictible pendulum from guitar panache to guitar ambience to guitar drone without warning. Dont even get me started on his other work, most notably the ever-missed Comets On Fire and last year's surprise behemoth Rangda (False Flag is an album that still energises and excites me today...)

Yet it is only in the past eighteen or so months that I can safely say that I have been a SOA fan. I guess I was always wanting Chasny to bust my skull open like his best Comets... work, without being patient enough to delve into his other sonic waters. But I have explored every Drag City release he has thrown out (five since 2005), and his latest, Asleep On The Floodplain, is a great album.

Occasionally there are lyrics (Hold But Let Go, River Of My Youth) but the lyricism is in the guitarwork, with Chasny stepping out and proclaiming his intent - or lack of it. For he is still as frustratingly difficult to pin down stylistically as ever - yet he has honed tracks that exude confidence and bravado. This isnt someone trying out a few styles to find out which one fits - this is someone whose tastes may change from day to day, but has the perfect soundtrack for such flights of fancy. And then there is Sword and Leviathan - its what I love about music, the drone, the psych, the epicness, the virtuousity...

Dont worry about trying to pigeonhole Chasny - just let him BE.

Email ThisBlogThis!Share to TwitterShare to FacebookShare to Pinterest
Labels: Six Organs of Admittance