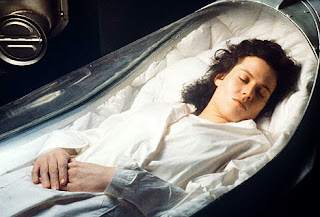 Cos we've been in an involuntary hibernation for a few weeks, the inbox is clogged with some really good music (and some muzak, which is nice too). So this weekend you are getting a double dose of Hits From The Box! Lucky you, right? Right. And dont think we wont go all Ripley on yours asses if you dont get into it, ok? (NB - sorry for the lack of pics for these bands, my computer is doing weird stuff, so when I get the time and opportunity Ill update it, but until then - just enjoy the tunes!)

And Im starting off big, as Ive fallen for the skewed machinations of this unassuming first band. D/Wolves are, by their own admission, a dreampop, freakpop, gypsy-gaze, mudbath, post-spooky, spazz rock band. Whatever they are, their debut LP Freak Of Nature is damn sweet - here's hoping that these euphoric pop gems outta San Diego get noticed, and soon! This was a real surprise, so much so that I aim to make this my road trip music this afternoon when cruising down the sunbaked highway! Be part of the cult, and head over to their Bandcamp pronto for a free slice!

Drop Electric take us bake down a notch, offering some nuanced instrumental rock that is accomplished in its ebb and flow. Their debut album Finding Color In The Ashes is damned fine, and this is despite a major setback - their former lead singer had to pull out of the band when her family died in a car accident back in 2008. This album sets up as a testament not just to her, but to staring up in hope despite adversity in general, as well as standing the test of time without that added knowledge. Which is why the track here fits the bill, and highlights why this band needs to be lauded. Keep it up guys! (And a goodwill gesture from the band - their album for free!)

Man Benu are a darker, yet more straightforward act out of Brooklyn, heavily influenced by the post rock movement. Which sounds like Im selling them a little short, but their Dear Shadow 7" is impressive in building a discordant tension not far from early Blonde Redhead territory - elegiac yet brooding, threatening. Its the rolling darkness that never fully comes to light that is most impressive here.

Baltimore kids of whimsy Eureka Birds have just released Eureka!, an EP that cruises along adhering stringently to the classic pop structures whilst infusing it with enough creative malaise that it'll have you lazily tapping your toes against your own will. Just try not to sway and sing the harmonies here, I dare you! In saying that, there is enough 90s college slacker guitar interplay here to make it "fresh" - but who cares? A good song is a good song, and Eureka Birds have written a few of em here. Eureka indeed! (And as an aside, the Beatles-esque 'Sarah (Sits And Cries)' makes me laugh - sorry Sezz, but it does...)

Man, where do you even start with Gamma Like Very Ultra? Weird as fuck doesnt even start cutting the mustard, pal. Their warped compositions are steeped in free form jazz, but deliberately eschew musical norms to inject a large dose of silliness and wild abandon, so much so that listening to their self-titled album is like eating a tub of Ben and Jerry's ice cream whilst sitting naked on a block of ice. They list Zappa, CAN and Captain Beefheart as influences, with a healthy dollop of Sonic Youth no wave dissonance, which is fairly prescient.

And finally Brighton's P For Persia have done some serious touring in the past year, all in preparation for their second album Coral Canyon. Its what is to be expected from the instrument-swapping foursome - essentially, noise rock that incorporates a miasma of movements such as electronica, prog, stoner rock and Chiptune - truly... How these guys arent signed yet is beyond me.