Dead Angels and Black Meadows As We Wash Into The Sea... 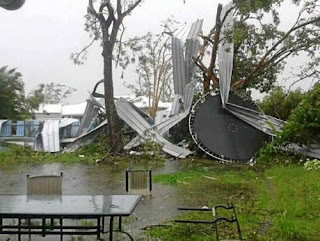 This week the announcement of new albums from two of the world's premiere psych rock bands hit the streets, and it would be remiss of me not to shine considerable light on them both - especially as these bands have the tinge of the Apocalypse about them, with their search for the greater realms and all, and seeing as its getting all environmentally apocalyptic here in Brisbane, it is befitting to use these guys as the soundtrack to our demise... 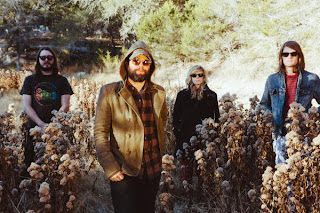 Firstly, I have writ large on my love of Texans The Black Angels throughout these "illustrious" pages - the fact that their set at a hail-plagued and frankly underwhelming Harvest Festival this year was a clear highlight that their effect over me is far from diminished. The fact that their guitarist Christian Bland is responsible for one of the best curated festivals on the planet, the Austin Psych Fest, ups the ante. The fact that they accepted SM local faves Dreamtime to join the fray this year is cherry on top. So the announcement of Indigo Meadow, The Black Angels' fourth longplayer, piqued my interest no end. The first taste comes in the form of 'Don't Play With Guns', which is not about the Aurora Colorado Dark Knight shootings, but could very well be.

“Our music has always tried to shed light on issues that may be hard to deal with or confront,” says singer/multi-instrumentalist Alex Maas. “If people think they can ignore the issues they are wrong. Don't play with guns, don't touch a hot stove, don't give your child a poisonous snake, don't turn the cheek when artists are willing to discuss these issues. In ‘Don't Play With Guns’ the antagonist is a female who has the power of persuasion over a man,” he continues. “Substitute the female antagonist with a Nation, substitute the manipulated man with yourself. Heed the warning: Don't Play With Guns.”


We mustn't get too carried away - this is a psych band that loooooove getting high - but their notions are spot on here, and the song is true BA black magic. 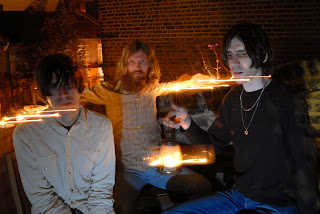 Trek to the West Coast though, and you find a band equally as adept at wielding the dark, chugging death rattle of psychedelic dirge. Los Angeles' Dead Meadow are resurfacing after a break in creative output (2010's The Three Kings was an exhaustive trip, albeit one bristling with darkly rich undercurrents), prepping a double LP to be titled Warble Womb (put out by Xemu Records). This is doubly exciting seeing as it marks the first album to feature returning original member and contributing songwriter Mark Laughlin (drums) since 2001’s Howls From The Hills. The reunited original trio of Laughlin, Jason Simon (guitar/vocals) and Steven Kille (bass) released the following statement on the new material. “The new material will strike many as a return to the heavier side of our first albums. However, it still retains a good deal of the psych-pop element that was more prominent on our Matador Records releases. The way Warble Womb came out, we are viewing it as almost a follow-up to Howls from the Hills.”


Hole. E. Shit. Colour me all kinds of LSD-induced excited. Now as long as I ride this wild weather out...
Posted by Brendan T