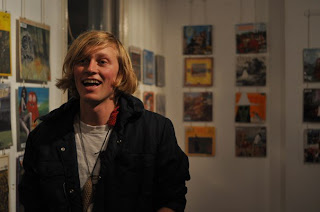 Last year was absolutely stellar for Aussie rock albums, whether they were narcissistic (Slug Guts, Spinning Rooms), or narcoleptic (Bitch Prefect, Pageants). Possibly at the top of the heap was Craig Dermody AKA Scott & Charlene's Wedding. Starting with the struggling ne'er-do-well in 'Gammy Leg', the ambling spirit of Para Vista Social Club which also graced the excellent split record with fellow Australian slackers Peak Twins. It's Dermody's scratchy, blase observations of the minutiae of Australian life that elevates his music, which continues onwards even after he has moved to New York. The bare-bones honesty is endearing and relatable, as can be seen on the title track to his about-to-be-released mini-album (through Critical Heights), Two Weeks. There are only a couple of new tracks on here, but with a new album in the wings we won't have long to hear how the misplaced Dermody views life in the Big Apple. Odds on, its same shit, different day. Hopefully that leg of his has healed...