A Double Dose Of Urinary Confection

It's not often that you get excited about the act of urination - well, I DON'T, I can't speak for you - but today I have been listening to not one but TWO albums by bands enamoured with pissing. 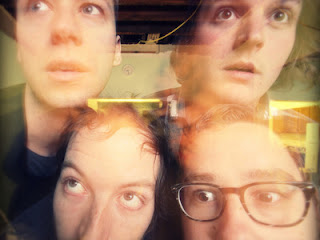 Pissed Jeans have lain a bit quiet for a while, which isn't like those misogynist bastards (although the Sam Kinison Woman 7" with 'The L Word' featuring Brendan Suppression was awesome). Yet 2013 promises to be all about the Philly four-piece as they release the nihilistic Honeys on Subpop. It could very well be the best album they have put out - there is the gnashing of teeth, Jesus Lizard-whisperer 'You're Different (In Person)', the laconic crawl of 'Cafeteria Food' or the breakneck nihilism of ‘Bathroom Laughter’. Brad Fry is in scintillating form on guitar duties here, and vocal shredder Matt Korvette is in brilliant lyrical mode too. It all adds up to another demonic ball-tearer that inexplicably infused with killer hooks amongst the dirge and debris. No one know how this works, or why – just be thankful it does. 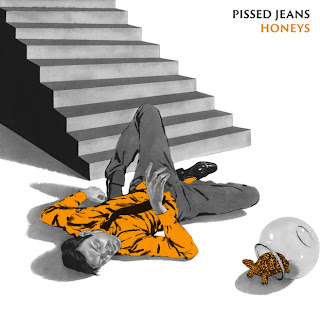 If you preorder now, you can get a T-shirt bundle and go into the running to get the record in orange vinyl AND a 7" of some of their long-lost first demos! 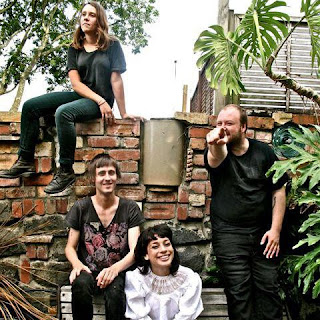 Now I thought the name Pissed Jeans was disconcerting - that is until Benjii from MUZAI Records sent me the second LP from Auckland band Girls Pissing On Girls Pissing. Their music fits their moniker too - offputting, disturbing, morbid, perverse, and (for some) extremely attractive. Eeling is the kind of record that crawls inside your every pore, lays eggs and hatches inside you. Painful and horrifying, yet indelibly a part of you from that point on. Cronenberg for the aural masses. This four-piece (two boys and two girls, just so that you know gender plays no part in these depravities) weave nightmarish visions at a funereal pace. You might hear some primitive post-punk in there; some subliminal hardcore; some hypnotic rhythms of unease a la My Disco; some feverish rails a la the defunct Snowman. Eeling is a dark wonder, a disturbed revelation, a manifesto for the people under the stairs, gimp suit and all.

Dose yourself in piss.