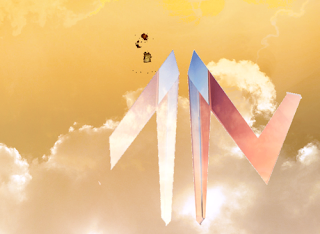 One of the craziest percussive noise acts to have assaulted our senses would have to be LA's Foot Village. Their batshit manic mantras have divided audiences wider than the Red Sea (see that? Total Biblical reference!!) with some proclaiming their noisy rackets as compulsory listening, and others deeming it more inhumane than water torture. My verdict? Foot Village rock all kinds of balls. So when one of their members Brian Miller ventures out on his own, under the moniker True Neutral (I'm guessing in reference to RPGs), then I'm all over it like a venereal rash. Miller himself sees True Neutral as being ideas that don't translate in the chaotic world of Foot Village, as the expansive nature of the compositions benefit from instruments other than drums. Before you start quaking at the idea of Miller doing "real" songs (his work on Back To The Future The Ride, whilst ambient in nature, still swirls around a vortex of nuts), he also describes them as "sci-fi visions". Crisis averted then...

But as if he would leave the percussive nightmares in the closet. One of the tracks, 'A Few Lights On The Wall', is a collaboration with the ever-brilliant Brian Chippendale (Lightning Bolt/Black Pus). 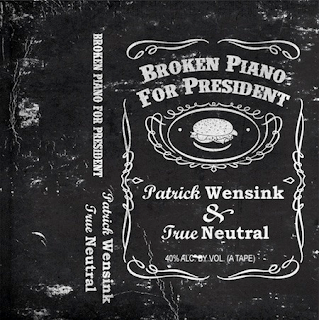 These tracks are being used as a soundtrack to accompany an audiobook of author Patrick Wensink's Broken Piano For President, and the blurb sounds suitably surreal - "'Broken Piano for President' is read by the author, Patrick Wensink. It is the story of a noise band caught up in a conspiracy involving fast food moguls, international space programs, and of course, their own insane music." The audiobook is abridged and read by the author himself, with side A being the novel and score and side B score only. The theme tune (yes, a theme tune to a book, genius!) is 'Call To The Herd', which is also below. You can grab this incredible piece of literature/music/art from Miller's own Deathbomb Arc label here.