Scratchin' Round - So Stressed, Nonagon, Violent Past 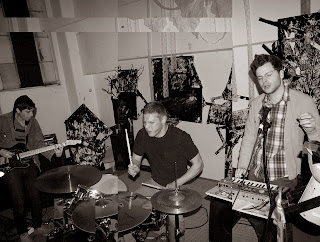 This guy tells me today that he did a management course last year. Is it wrong to think immediately worse of someone who admits to such a thing? Nope. He goes, 'Yeah, they told us that if employees are getting their backs up about things, you just form a committee and let them bluster. After that, it's too late for them to do anything." Seriously. Some chump stands up in front of a whole bunch of other chumps and straight-face tells them how to make chumps out of everyone else. I cringe whenever I hear people ask for feedback.

So Stressed have not been to management school. And from what I hear, if anyone tried to junk them into a committee, the noise would be so resounding that the bosses would have to up and leave the building. I'm beginning to think that this might be the only way to break through; to make the noise you want to make, for as loud and long as possible; to give them THIS as feedback when they ask for it.

I 'strongly agree' with all of Attracted to Open Mouths but if you're too busy collating data for your focus group presentation, you still need to make time to give 'Hairstyles' a go. 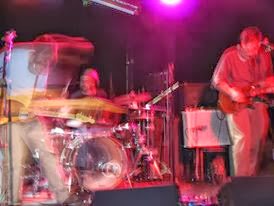 And damn, if I ever get up the guts to give it back to 'em, I'm gonna play Nonagon. Out on their own label, Controlled Burn, the name sums up the sound perfectly - this is organised stuff. Organised stuff capable of doing some real damage. Controlled, yeah, but in the back of your head you just know that while it's meant to be under wraps, next minute could very well be licking the building upside down, turning all that carbon they thought was theirs into atmosphere forever. That'll get 'em up the corporate ladder quicker.

'The Last Hydronaut' is drilling, relentless and passionate in a way that a lot of music out our way - the lazily complacent, climate change denying, land down under the average line of intelligence - isn't. See, 'cos if you think about things for a bit, and you don't just want to roll over and take it, this is the kind of music you'd make, I reckon. 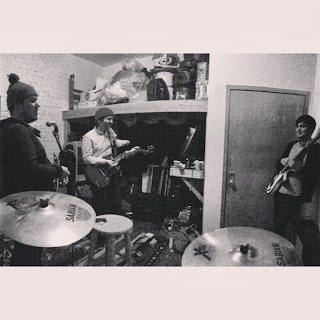 But wait, maybe I'm getting a bit carried away. Burning the place down isn't the only way to resist getting caught up in the tidal wave of ignorance threatening to wash us all into frothy oblivion - and plus, it'll just add to the whole (very fucking real) emissions problem. Maybe getting your mates together to spread the news rather than the gasoline is a better idea? There's no easy answers. But you do have to make people realise that they don't give a shit before they will.

Violent Past are infected by the malaise, but there's some self-awareness here on Demons, something that looks to the future and gets a little ready. 'Yeah, I'm wearing a white business shirt,' it says, 'but I'm hungover and I ain't cleaning that stain off today, and who knows what'll happen tomorrow? You really want me to join your working party?'

So whether you spit or march or yell or whatever, just don't let some chump pin you down - or at least make the clammy fucker have to put down his briefcase to do it.
Posted by Unknown