What's At The End Of The Cosmic Dead? 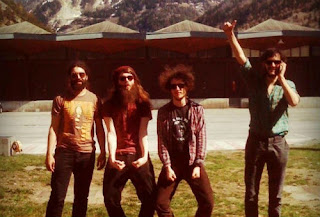 It was late last year that a friend of mine in the States claimed to already know what 2016's best album would be. He had caught a whiff of Rainbowhead, the new album from Glaswegians The Cosmic Dead, and guaranteed that it would "melt my face into my asshole". Fair enough. I was a big fan of Easterfaust, and their recent splits with SM faves both old (Mugstar) and new (Girl Sweat) were spectacular also. Yet it's taken me til now to get into it - and wow. The fact that these four pieces are heavily improvised is not a surprise - the band has been doing their thing for over a decade now. The fact that these recordings were committed in a remote cottage in the Scottish Highlands also doesn't come as a surprise - The Cosmic Dead are notorious for their forceful melding of time and space with their incendiary, hypnotic performances, therefore being sequestered in some of the oldest environments in the world only helps to augment their aesthetic. What is surprising is how pleased you are when the first thundering hits of 'Human Sausage' bludgeon their way out of the speakers and everything sounds as they should be. Everything is present and accounted for - riffs that are as mountainous as they are monotonous, a colossal metronome; elemental synth that offers to be both retroactive and far-seeing; a rhythm section intent on marching for infinity into the abyss. 'Skye Burial' gives the requisite respite, some breathing space, before 'Inner C' roughs things up even further. But it's the B-side title track that truly astounds. That scritching metronome slide permeates the song, while basslines squirm, drums chatter and thump, other guitars come in and out with cantankerous, calamitous jagged edges, sometimes dissolving, only to resurrect in an altogether more brutal fashion. This is psych rock at its most base, blasted, bastardized - and brilliant.

Pick up Rainbowhead from Blackest Rainbow here. It's been selling like gangbusters on Norman Records, so expect this one to disappear in short order.