Keep Your Talk Tight During These Rolling Blackouts 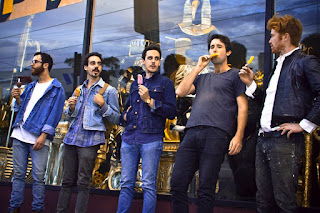 There is probably a lot I could say about Melbourne rabblerousing guitar top-o-the-popsters Rolling Blackouts and their new EP Talk Tight. I could wax lyrical about the laconic sun-drenched meandering jangle of 'Tender Is The Neck', reminiscent as it is of the backwards-looking-forward warm fuzz that The Ocean Party happily inhabit. I could ramble on about the heady motorik rhythms and wavering effects that propel the rumbling rock of 'Wide Eyes', a track that has country twang, psych circularity and garage grit bashing out in a dingy basement bar, a gleeful blast that is as much a jailbreak run for the sun as it is a jam spilling into the early hours of a drunken bender. I could embrace wholeheartedly the upbeat canter of 'Wither With You', a sparkling bit of rough guitar pop that evokes a jagged Jonathan Richman or a young and carefree Paul Kelly, riding a steam engine of melancholy into the heart of the sun, the warm explosion masking the chagrin. I could even talk about the rambling on of 'Heard You're Moving', an Ocker Boss-type, maybe an Outback town Elvis Costello, revelling in adolescent masculine misadventures, the big fish frying in the small pond, as the wall comes down. But I can't keep hitting on 'Clean Slate' and wiping the slate clean, a raucous belter that starts off a little like Eddy Current's 'Rush To Relax' before we enter more parochial, golden-age Aussie rock realms, a shambolic jam (still...) that is the way I want to start every day.

Shit, I did say a lot, didn't I? Enough then. Get addicted to Talk Tight (through Ivy League) now.