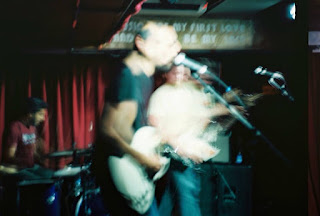 Another of the acts we have on Tuesday's Sonic Masala showcase, Roman Typo is a new London band that have me champing at the bit. It's clear the trio have that post-punk angularity etched into their DNA, but rather than the Joy Division route, or even the Wire route, we have a cross-Atlantic reference that we don't hear too much these days - that of seminal band Fugazi. Sure, the vocals share a tonal affinity with Mackaye and Picciotto, but there is a languid fluidity to the grooves that are laid down before things blast through the breakers. The inflections, the dragged notes, the melodies that feel ominous - it is all there, fermenting.